MintWave is an information device manufacturer that provides products, systems and services over a range of fields, including thin client systems and thin client application equipment for local government, private enterprise, and educational institutions, monitoring control systems for electric power systems and facilities, and ERP usage and design support systems. One of the company’s production bases in Nagoya focuses primarily on the manufacture of specific use terminals, medical business equipment terminals, and general purpose thin clients. The plant manufactures, for example, up to 10,000 function panel units a year on an OEM basis for a well-known manufacturer.

Relocation Drives the ICT-ification of the Factory

The Nagoya plant was both relocated and renovated in March 2014. While the factory floor area was reduced by 46.3% it also underwent production streamlining through the implementation of a range of ICT solutions under the concept of “The whole factory as a showroom”. The production streamlining project began six months before the relocation and with the goal of creating a “visualization factory” a plan was put into place which involved the development of a thin client assembly instruction system, the introduction of electronic lamps for work time visualization, and the introduction of continuous monitoring of the assembly and inspection platform status. 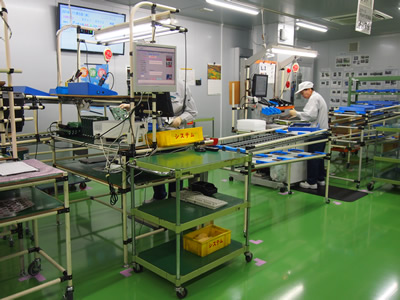 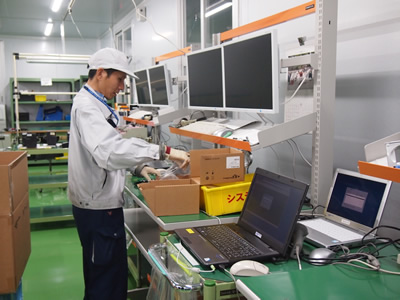 The Nagoya plant is primarily involved in the manufacture of specific use terminals, medical business equipment terminals, and general purpose thin clients.

In the past, instructions and process documents were displayed in paper form but developing a thin client assembly instruction system which displays procedures and notifications on a monitor enabled production which need not rely on human memory. The introduction of the electronic lamps meant that work time could be visualized by displaying the difference between planned and actual time on a larger monitor. Furthermore, video recordings of all assembly-related work are being utilized in post-shipping defect reviews and the development of prevention measures. 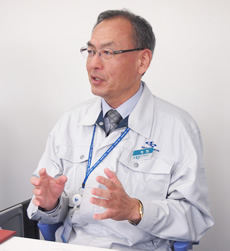 In another investigation of the ICT-ification of the in/outbound shipping tasks which was carried out during the streamlining project led to the introduction of ConMas i-Reporter, an electronic reporting solution. Reflecting on the background leading up to the implementation of i-Reporter Nagoya Plant Chief Mr. Kazuhiro Teranishi notes – “I learnt that the department responsible for our electric vehicle rapid charger maintenance service was using i-Reporter in its field inspections and I wondered if we could utilize it in our in/outbound shipping work as well.” In the past, when a part was delivered to the Nagoya plant the first step would be to enter the incoming number of units and inventory volume by hand into paper-based inventory management sheets. Then, another worker would transcribe them into the production management and core business systems. Outgoing parts were managed withthe same paper-based procedure. This meant that data entry tasks related to in/outbound shipping were a large burden on workers. Mr. Yuichi Yoshinaga, Section Chief of the production group, notes that “the fact that had paper forms for in/outbound shiping of every raw material used in the products that we manufacture and thus had to manually record every time we used or received a shipment of parts led to input errors and emissions. Double-checking to prevent mistakes added another layer of work and was a cause of increased workload.”

A 90% Reduction in Time Spent on Shipping Tasks

In this context the Nagoya plant replaced the paper inventory management sheets with i-Reporter and developed an inventory management system which uses an iPad as an input device. The i-Reporter-based system involves using an iPad to scan a QR code on the receipt and then entering the number of units received on the downloaded inventory management sheet when a part enters the plant. When the number that has been entered is checked and authorized by the reporting system the stock data is sent to the production management and core business systems. As the inventory data is automatically read from i-Reporter the need for entering the data into the two systems has been eliminated. On the outbound shipping side too, the fact that i-Reporter specifies the required parts has eliminated the need for paper-based management which used to involve referring to a printed picking sheet. 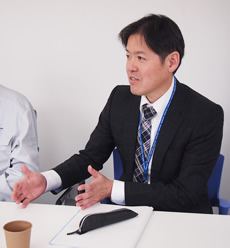 Mr. Shinichi Kawase, Director of the business planning department at the solution sales headquarters points out the significant contribution that the automation enabled by i-Reporter has made to operating efficiency – “We can now use an iPad to easily carry out the inventory management tasks that used to be paper-based. Another important aspect is the elimination of data entry duplication in our core and production management systems due to the fact that i-Reporter synchronizes our inventory volumes between the two systems.”

Mr. Yuichi Yoshinaga discusses how the development of the iPad-based in/outbound shipping management system resulted in a significant workload reduction.

“The time spent on shipping related tasks used to be in the region of 840 minutes a month. Using i-Reporter we can now carry out our tasks by simply tapping the screen. This eliminates the need to complete paper forms by hand and perform manual calculations. My feeling is that our workload has decreased by about 90%.” (Mr. Yuichi Yoshinaga) 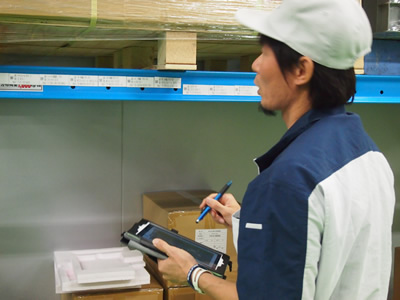 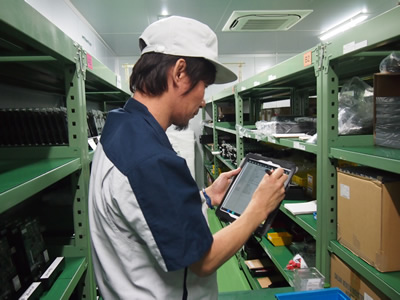 iPad-based management has resulted in a large reduction in time associated with shipping tasks.

On the incoming shipments side as well, Mr. Yoshinaga notes that monthly workload has decreased from around 160 minutes to close to 100. As the interface is similar to the previous paper-based procedure there was almost no resistance to the new technology. On the contrary, he reflects, “i-Reporter was well received, with people focusing on benefits such as the elimination of data entry tasks and concerns about calculation errors.” 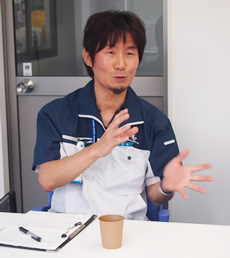 Mr. Kazuhiro Teranishi discusses how the effects of the implementation of i-Reporter are not limited to work on the factory floor. It has had an effect on the management side as well. Input omissions and errors in inventory management had led to a situation where reported and actual inventory volumes did not match, meaning that correct figures could not be discerned until the end of each month. Furthermore, even when discrepancies were found it was difficult to locate where, exactly, the error had occurred. The automation of data entry using i-Reporter has thus made it possible to have real-time knowledge of the inventory.

“If we don’t have an accurate picture of our inventory volumes we will over compensate in our purchasing, which will lead to a bloated inventory. Being able to use i-Reporter to manage our inventory in real time has meant that we no longer need to manage unnecessary assets.” (Mr. Kazuhiro Teranishi)

Mr. Yoshinaga further points out that real-time knowledge of actual inventory levels has led to efficiency improvements in purchasing.

“In the past it was not until the end of the month that we were able to ascertain the parts that we would be running low on in the following month. If we could not procure the parts in time then production downtime would be the result. Being able to see our inventory in real-time allows us to provide our procurement department with timely information and thus lower the risk of running out of parts.” (Mr. Yuichi Yoshinaga)

All Parts to Be Linked with i-Reporter

The application of cutting-edge ICT initiatives at the MintWave Nagoya plant – including the i-Reporter-based inventory management system, the introduction of the electronic lamps and thin client assembly instruction system and systemization of the reception with a dedicated terminal – is continuing apace. Current projects include the installation of solar panels and the construction of a three-phase battery storage system. Mr. Teranishi notes that as a group company of the electrical equipment manufacturer Takaoka Toko they are utilizing the latest products and systems.

“There is a systems development team at the Nagoya plant and they are in a situation that can quickly carry out what they want to do. I don’t want to limit the benefits to production operation and I hope that turning the factory into a showroom will lead to new business opportunities.” (Mr. Kazuhiro Teranishi)

MintWave views the i-Reporter implementation example introduced here as just a first step. Mr. Hiroshi Takeuchi, Team Leader of the quality assurance team in the production group, is aiming to expand the use of this technology – “At present, there are still parts that have not been transferred to i-Reporter-based inventory management. In the first phase parts with a high delivery frequency were prioritized for integration. As a result, 80% of our inbound shipments are covered by i-Reporter. Going forward, we plan to expand this to all parts that we use.” 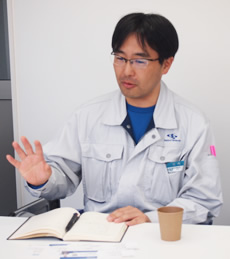 Furthermore, Mr. Takeuchi plans to expand i-Reporter usage for not only inventory management but also their testing checklist as well. He explains that he would like to use i-Reporter to digitize and automate the current process, which involves the worker manually filling in a printed form.

“The department responsible for our electric vehicle rapid charger maintenance service uses i-Reporter for its testing checklist as well. In fact, the reason that we first looked at i-Reporter was to see whether or not we could use it for our own product testing. While changes in our priorities led to us using it for inventory management at present we would like to employ it in our testing checklists in the future.” (Mr. Hiroshi Takeuchi)

“i-Reporter is an input tool which is positioned at the entry point to the system. It has the benefit of providing superior performance in data entry accuracy and real-time analysis. The key to implementation is how these characteristics are used. There are two systems – the core business system and the production management system – working within the Nagoya plant. Linking both systems through i-Reporter’s external API has resulted in efficiency increases over our entire operation.” (Mr. Shinichi Kawase)

When it was relocated, the Nagoya plant was transformed into a cutting-edge production base which utilizes a variety of ICT innovations. The company has further plans to develop the factory into a “showroom” through the implementation of a range of new technologies and productivity increases.

Many companies in various industries implemented i-Reporter
No.1 market share in paperless solution in Japan!