Sekisuii Seikei uses i-Reporter for creating daily reports, counting, data transfer, and administration. Previously, manufacturing daily report was made by paper and on Excel, but to improve work efficiency, it was computerized. 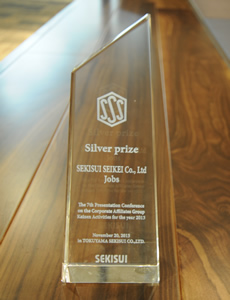 Previously in the age of paper and Excel, the staff spent 300 hours per month to create the daily report and for the related administration tasks. However, after i-Reporter, it is 130 hours. 170 hours (60%) have been eliminated.

Internally, using the product was highly complimented. We won the Sekisui Chemical Group kaizen contest silver award in 2013. It was first time the Project Information System Department received an award.

Three reasons why daily reports weren’t electronically available until then

– Q: Can you tell us the details why laptop PC is not appropriate at the site?

Reason 1. A Laptop PC is not appropriate to use while standing

– Q: Can you tell us the details why laptop PC is not appropriate at the site?

A: We feel that Laptop PC is not appropriate to use at site essentially because we can not enter the data on note PC while standing, and then Laptop PC is expensive but break down easily. Manufacturing sites are hot and humid. There also is dirt and dust. Laptop PC’s will frequently brake down.

However, these concerns are solved after a tablet such as the iPad shows up.

First of all, information on the tablet can be entered while standing. Also, the price is more reasonable than for a laptop PC.

The tablet made it possible to make the daily reports electronically available.

– Q: Can you tell us the details why manufacturing sites didn’t feel it was necessary?

A: For many years, they had been making daily reports by paper and Excel. Nobody questioned it. Overtime work was required. But if you think, “it is like that”, then it is okay with everyone.

Even if you proposed “digital daily reports”, the reaction you got was “More of a burden”, “Too difficult,” or “Hard to learn how to use it”. Also stated was “The current way is okay,” or “We don’t want to change”.

Reason 3. There was a psychological distance between the manufacturing sites and the Information System department 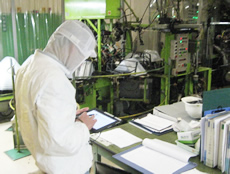 – Q: Can you tell us the details about the psychological distance between the manufacturing sites and IS Department?

If you state to the sites, “Digitalization of the daily reports makes the company better”, the manufacturing staff would say, “You don’t know the real site’s situation”, “It’s the grandstanding of the Information System Department”.

This time, what is the cause to digitalize daily reports?

– Q: You eventually got rid off the obstructive factors. What is the story behind that?

A (Mr. Sawada): One of the biggest factors was the influence of Mr. Sagae from the Hyogo Takino factory. Mr. Sagae and I joined a company at the same time, so we knew each other. 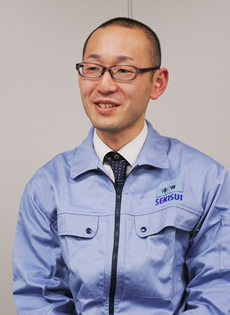 A (Mr. Sagae): My initial motivation was “I want do more efficient personal work (reduction of my working hours)” rather than a lofty motivation, such as “I want to improve the whole factory.”

I was in charge of making manufacturing material and entering production data in to the administration system, and it took me 4 hours and half each day.

One day, I talked to newly posted manufacturing manager, “I think the current situation is very inefficient”, then he said, “That is right, better work on it.” 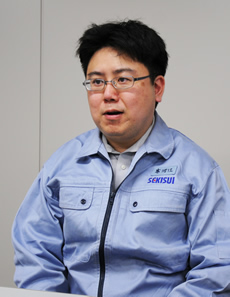 – Q: What was the next action?

A (Mr. Sawada): Immediately, I started collecting information about daily reports digitalization software. For one of the research activities, I went to an IT exhibition in Tokyo and saw i-Reporter at CIMTOPS booth, with the banner stating “Digitalizing Reports by iPad”. When I heard the details, it sounds like it had everything I wanted.

A (Mr. Sawada): We focused on selecting software. Mr. Sagae said, “i-Reporter is pretty good, but there may be some other great products. So we collected other product information. The products for final consideration were i-Reporter and work flow software, which is web-based.

Here again are our requirements. This time specifically comparing the i-Reporter and Workflow products. i-Reporter was superior for all requirements, so we decided to implement it.

The superior points of i-Reporter

Here is the comparison sheet between i-Reporter and other products.

Key points of smooth i-Reporter introduction to the site

Here is the summary of how we introduced the i-Reporter.

Key point1: Explaining the reason behind using the new product

A (Mr. Sagae): When I explained the plan for changing the way we made the “manufacturing daily reports”, I honestly explained to them, “My working hours are totally consumed by the transcription of the manufacturing daily reports and I have to do overtime to do this work. If we use i-Reporter, overtime would be reduced a lot.” Then, I also explained that digitalization of daily records would make company better overall.

Key point 2: We paid full attention not to have a condescending and arrogant attitude

A (Mr. Sawada): This was a collaboration project with the factory site, which I haven’t done before. Therefore, I wanted to be sure of the product’s success. I didn’t want a negative reaction or misunderstanding because of my attitude. I was sensitive about this.

Key point 3: We asked people at the site to be critical while checking the i-Reporter

A: We politely asked, “From the point of view of working at the site, some things must still not be user friendly. Please feel free to speak out!” It tuned out the staff pointed out a lot of details we didn’t notice and accepted this process, which led to the building up of trust.

A: For the requests or demands from the site, we did our best to solve it together with CIMTOPS. Here are some details:

A (Mr. Sagae): We really made the idea of having efficient daily reports at the Hyogo Takino factory come true. We received many compliments from the site and this efficiency made whole factory’s quality go up.

(Mr. Sawada) Through this project, I really felt I could now understand “what the factory site wants” as the person who belongs to the Information System department. I would like to keep suggesting various idea to be useful.

Many companies in various industries implemented i-Reporter
No.1 market share in paperless solution in Japan!